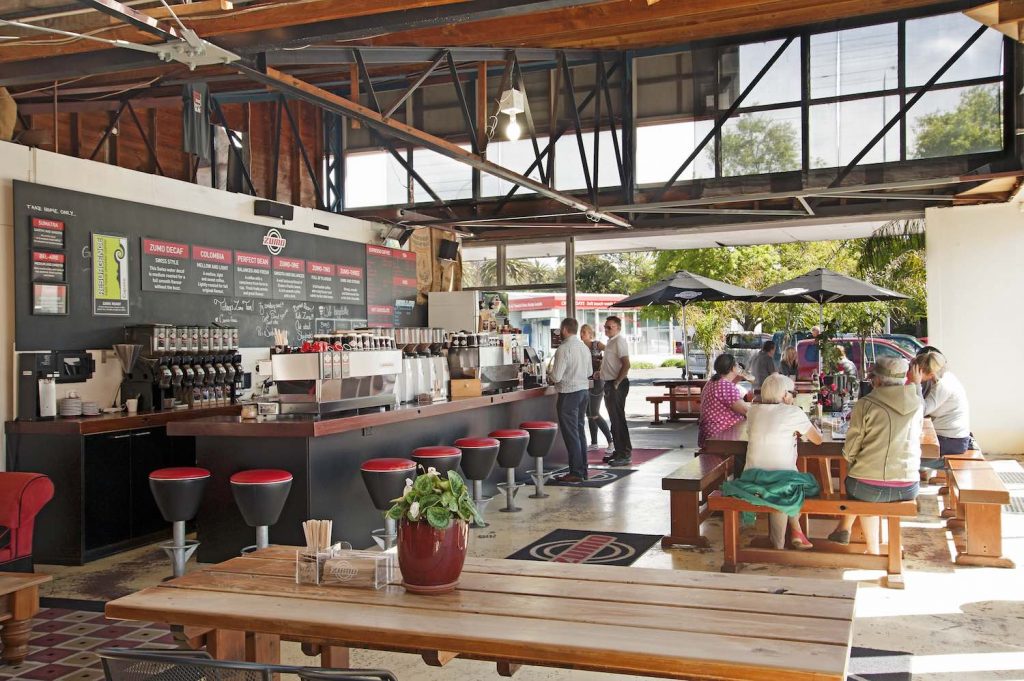 Zumo Coffee is not a café – it’s a coffeehouse experience of friends and family, exceptional service and the quest for the perfect  bean.

Zumo has been prominent at the northern end of Nelson’s Bridge St since 2009.

Coffeehouses began in the 16th century Ottoman Empire appearing in Europe in the 1600s where they were venues of debate, indifferent to social status and meeting places where business was done and news exchanged.

Zumo’s essence is the same.

“You don’t feel pressured that you have to leave because the waitress wants the table for the next group,” says Annalisa.

“You can hang out and relax and make that coffee last and have fun making friends, socialising with family or getting on with your work.”

Allen defines Zumo as a coffee emporium, not a café. But people do not go hungry.

Food is brought in daily by FreshBake and customers are invited to bring their own.

Allen, Annalisa and their skilled staff instead put their energy into making excellent coffee and their customers feel at home.

“At Zumo it’s is about building a relationship and making a customer’s day better,” says Annalisa.

“You feel that exchange of energy between the customer and the barista when you are working. It’s about providing the experience, not just the product.”

“Customers leave with a smile on their face and a great cup of coffee to kick-start their day.”

Their philosophy is that anyone walking in the door is entering their home, says Annalisa.

“It’s the delivery of an outstanding product with exceptional customer service in a casual setting. Do it and do it really well – that’s the connection,” says Allen.

“As I tell everyone who walks in here looking for a job – Zumo is a bit of a show.”

The show has grown.

The couple opened Zumo Wellington in late 2015 on the corner of Wakefield and Tory Sts.

He flies to Wellington weekly while juggling his role of head roaster.

Mastering the role of roaster of the perfect bean was helped by Allen’s years in IT, where he had to learn fast.

“l like roasting, it’s interesting and I find it cathartic.”

“There are variables – the weather, humidity, temperature and even the energy in your latest delivery of gas has an impact on the roast dynamic – you have to figure it out on the floor.

“My goal is to come up with a more perfect perfect bean.”

Zumo has multiplied into two retail coffeehouses and the coffee company, which roasts and sells beans.

One of its biggest challenges is securing skilled baristas with exceptional customer service presence.

“It’s a constant challenge because it’s a rare combination, but vital in our emporium format,” says Allen.

Zumo’s youth recruitment programme is designed to give young people the chance to upskill and earn while they learn.

It has seen young staff grow with Zumo.

Cissie Barron, who started with Zumo as a young teen, is now close to completing her studies at Otago University. She returns to run the barista training programme, among other projects, this summer.

“I feel lucky that when I look at the hard work of the youth programme the experiences have also been about watching them grow up,” says Allen.

His latest include automatic account top up and fresh coffee paid for and delivered with a single letter text.

Nelson’s nearly 7000km from San Francisco, where the pair met in 1994 when the insurance company Annalisa worked for hired Allen as an IT contractor.

Allen later retired from the global company, Accenture, where he designed and implemented computer systems for international companies.

“It was time to move onto something else,” he says.

The couple, and their child, chose Nelson as their new home away from global turmoil in 2010.  Allen invested in Zumo shortly after arriving in Nelson.

At the time the only thing they knew about coffee was drinking it, he says.

Allen has spent the last six years refining the concept and building-out systems.

Zumo is both environmentally and pet-friendly. The use of ceramic cups, recycling plastic bottles, cardboard and coffee grinds has dramatically reduced waste.

“One of the things we are pretty proud of is our pet-friendly smoke-free outdoor area,” says Annalisa.

Zumo also invests in the community with its current sponsorships including donations to Nelson’s Women’s Refuge and hosting the annual Nelson White Ribbon ride against domestic violence.

Allen, always the tech entrepreneur, is now focussing on franchising and expansion into the US.

“If I could clone myself I could keep three of me busy,” he laughs.