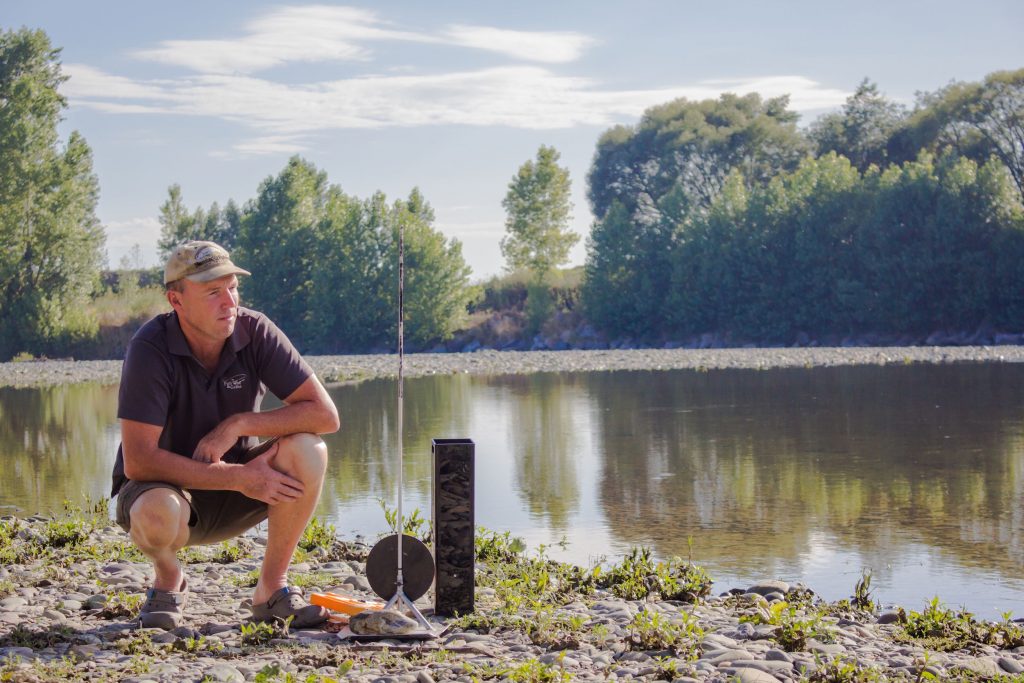 The poor condition of many New Zealand rivers and streams has started to galvanise public opinion and prompt political action, with concerns ranging from the health risks facing swimmers to contamination of freshwater wildlife habitats.

Those concerns are certainly shared by Rhys Barrier, regional manager of the Nelson-Marlborough Fish & Game Council. Besides water quality, however, Rhys is worried about quantity.

In a recent submission to the Marlborough District Council on the proposed Marlborough Environment Plan, he described low summer flows as “the most serious human-induced environmental issue currently facing all freshwater salmonid [trout and salmon] fisheries within Marlborough”.

“The elephant in the room, though, is climate change. You can argue and go to court and get all these minimum flows but then if summers are suddenly two or three degrees hotter, you might start getting fish populations tipping over. The Wairau and Motueka Rivers are already close to that limit, both quite often reaching 23 degrees in a normal summer.”

The flipside of global warming seems to be more storms and intense rainfall, leading to major flooding. This, says Rhys, can rip out spawning grounds and even bury adult fish under layers of gravel.

Historically, regional councils managed the environment but also provided for regional growth, he says. “Those competing demands for water meant that often the drive for regional development trumped river flows.”

Rhys sees those same pressures at work today as the Tasman and Marlborough unitary authorities try to balance all the commercial and environmental interests jockeying for a share of the limited water supply.

When it comes to the new Marlborough Environment Plan, Fish & Game don’t believe the council has got the balance right. “The new plan, as notified, is looking to double the irrigation allocation on many rivers. We’re saying, ‘Hold on a minute … you’ve provided a water allocation plan but you haven’t properly provided for the rivers’ needs’.

“The plan as it’s currently structured will severely damage some of those fisheries in the Rai and the Wairau. Ten years down the track, when all that water’s allocated, we’re going to have some rivers that are flat and unhealthy for most of the summer.”

Rhys says other man-made events, such as wetland drainage and land-use changes, including the spread of urban development, may also diminish and degrade the country’s prized freshwater resource.

Fish & Game is independently funded by licence fees from anglers and gamebird hunters. The organisation believes healthy rivers, streams and wetlands inevitably benefit native fish and wildlife – as well as New Zealanders who enjoy a range of outdoor recreational pursuits.

Apart from serious problems in the Buller and Gowan Rivers caused by didymo algae, Rhys is broadly satisfied with freshwater conditions across the Top of the South.

“New Zealand is one of the more blessed countries on the planet in terms of our available freshwater resources,” he says. “The Nelson-Marlborough region offers the most diverse opportunities for angling and hunting of any of the 12 regional Fish & Game council areas in the country.”

Rhys estimates there are well over 100 rivers of interest to anglers in the top of the South Island, plus many more tributaries and streams critically important for fish stocks and other wildlife.

A number of the region’s rivers and lakes are ranked nationally significant for fishing, with the Wairau, Motueka and Buller catchments topping the list. Both the Buller and Motueka Rivers have Water Conservation Orders on them – the legal equivalent of a national park on a river – protecting their outstanding trout fisheries.

“The Wairau gets twice the usage of any other catchment and is by far our No.1 ranking significant river. With 12,530 angler day-visits [in the year ending September 2015] it is easily the region’s most important sports fishery and is recognised as a nationally significant fishery.”

Rhys says anglers in pursuit of brown trout, rainbow trout and salmon have made the Wairau the 10th most fished river in New Zealand and given it an international reputation for brown trout.

The Nelson-Marlborough region enjoys a huge advantage in not having the intense dairy farming found in other areas, causing nitrate run-off that has significantly polluted waterways.

“Research shows that when you get more than 50 percent of a catchment in dairying, it creates major declines in fish stocks, not just among trout but also native species,” says Rhys.

“Because Nelson-Marlborough has a lot of mountainous terrain and national parks, there are not many waterways that have more than 40 percent dairying, market gardening or other intensive land uses that leach a lot of nitrates.”

While this region has nothing like the problems of Southland, Waikato or Taranaki, Rhys says nitrate levels are rising in the Rai catchment, between Nelson and Blenheim.

However, he says even here the dairying intensity is relatively low so the amount of nitrate run-off actually benefits the fishery, helping to create a thriving habitat for trout and native fish.

The problem with the recent boom in South Island dairying has been a lack of control, says Rhys, who argues that regional councils need to set catchment land-use limits to avoid the sort of mess found in places like Southland and the Waikato.

“It all comes back to the scale and pace of dairy conversion in the South Island in the last 10 years. Less than 20 percent in a catchment can be a very positive thing; once you get up towards 50 percent it starts to tip over.”

Rhys predicts growing pressure on farmers to adopt more sustainable and less water-intensive practices. While this is a challenge, he also sees it as an opportunity for farming to help safeguard the planet, our waterways and its own future.

One way this is starting to happen is by landowners growing clover and other nitrogen fixers to build up humus in the soil. This so-called “regenerative farming” enables the soil to store more carbon and water, use less nitrates and yet become more productive.

“Essentially the difference seems to be balancing and optimising the soil microbiology by using clover to fix nitrogen rather than piling on truckloads of urea,” Rhys says. “This has huge potential to help counter global warming by storing carbon emissions in the soil and at the same time greatly improving soil quality.”

Figures from the London-based Institute of Mechanical Engineers show it takes about 15,000 litres of water to produce a kilogram of beef, around 1000 litres for a litre of milk, and about 100 litres for a glass of wine.

Eco-savvy consumers, alarmed at such profligate water use, are increasingly turning to natural meat and milk substitutes. At the same time, scientists are looking at ways to commercialise the production of synthetic meat, milk and even wine.

“That’s a massive threat [to New Zealand’s traditional farming],” says Rhys. “Basically they can produce a steak that tastes, looks and smells like a normal beef steak for about $2 a kilogram and has about 20 percent of the environmental footprint of a pasture-raised cow.”

With near-natural milk and wine also likely to be produced in a laboratory, he says New Zealand farmers need to position themselves to meet the challenge posed by these seismic changes.

Rhys Barrier seems ideally qualified to keep a watchful eye on the health of hundreds of waterways across the Top of the South.

He has worked at Nelson-Marlborough Fish & Game for about 13 years, the last two-and-a-half as regional manager. Before that he was with the Department of Conservation for seven years, five as a freshwater technical support officer in Nelson, and two in Wellington co-ordinating the drafting of native freshwater fish recovery plans.

The 47-year-old’s CV also includes working for Niwa (National Institute of Water and Atmospheric Research) as a freshwater science technician, and acting as an ecological restoration consultant for various regional councils.

Rhys, who grew up on a farm near Thames, earned a Master of Science degree from Waikato University, studying the habitat preference of black mudfish in Waikato swampland.

He now heads a team of two Fish & Game field officers in Nelson and one in Marlborough, plus an administrative manager at the organisation’s offices in Stoke.