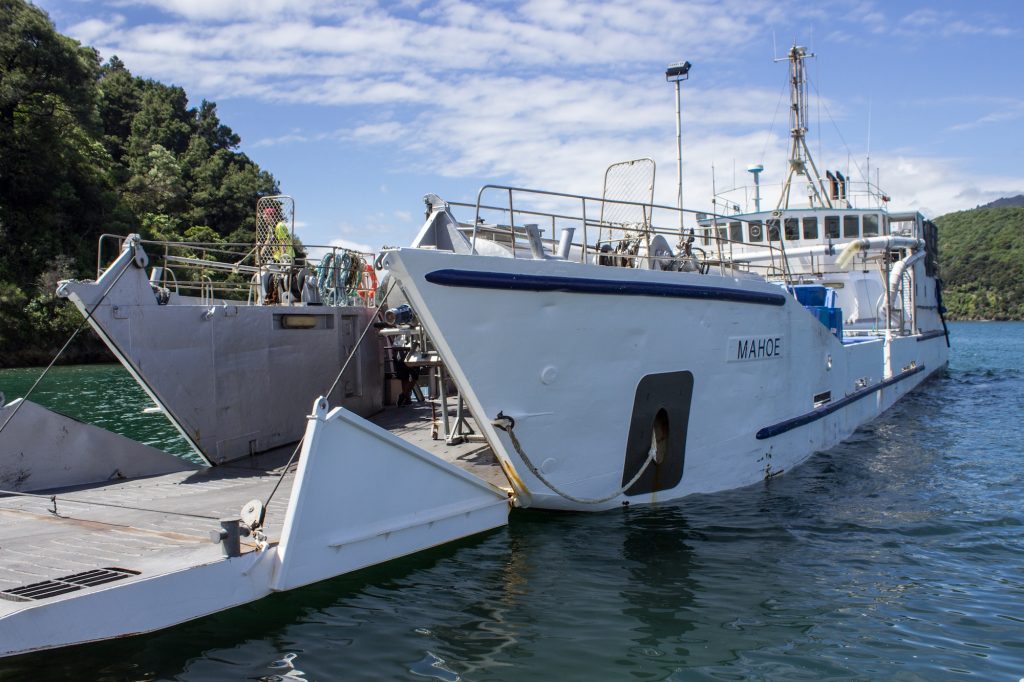 On a midwinter’s day in 1919, the Johnson family’s commercial vessel, the Mahau, left Havelock carrying its very first load of paying passengers into the Marlborough Sounds.

The short voyage heralded the start of a successful barging business that, nearly a century on, still departs Havelock every day.

The legacy of the business’s founder, Eric Johnson, has been to provide a solid, reliable lifeblood for the industries, residents and holidaymakers of the Marlborough Sounds, and it is continued today by his grandson Peter Johnson and his wife Jennie.

Today, says Jennie, the business still relies heavily on farming for the bulk of its work – but instead of sheep, which come mainly from D’Urville Island as other farms have gained road access or changed to other land uses, it’s salmon.

The ability to evolve and meet industries’ ever-changing needs has been one of the secrets behind Johnson’s longevity as a business.

“The company has adapted to new and modern demands. The salmon farming has been fabulous in the fact that it fills that gap that agriculture has left – we’re still carting for farmers, it’s just a different type of farming.”

Johnson’s was instrumental in the early days of mussel farming in the Sounds and had one of the first mechanised mussel harvesters in the area.

The company no longer deals with mussels, but moorings are another side of the business that’s grown exponentially in the last 20 years; Johnson’s services about 1200 of the 4000 moorings in the Sounds, says Jennie.

At the heart of Johnson’s Barge Services are, of course, their barges.

Their main vessel is the Pukatea, the family’s first motorised barge used for main freight deliveries, livestock, salmon feed and smelt and moorings. The Mahoe is dedicated to salmon harvesting, and the Titoki, Johnson’s latest purchase and ‘grunty little vessel’, was modified to do mooring work and tow salmon farms.

A launch, Tawhai, tows the Hinau, a dumb barge. Jennie says the Tawhai is special to the Johnsons as she was the last vessel to be designed and commissioned by Eric. The 52-year-old kauri launch is perfect for pushing barges loaded with logs and heavy machinery, she says.

Johnson’s Barge Services employs 12 people, including Peter and Jennie’s son who works as an engineer. Peter’s father Allan, mother Val, two uncles and aunty have also been involved in the Johnsons’ companies over the years.

With their roots firmly imbedded in the Havelock community, the company is now a major sponsor of the biggest event on the town’s calendar, the Havelock Mussel & Seafood Festival.

Jennie says having the business at a point where it’s not ‘running on a shoestring’ and they can put money back into the community is wonderful.

“The festival is fabulous for the community because it brings people together to produce something that they can be proud of, and it puts us on the map as a little town that can definitely punch above its weight.”