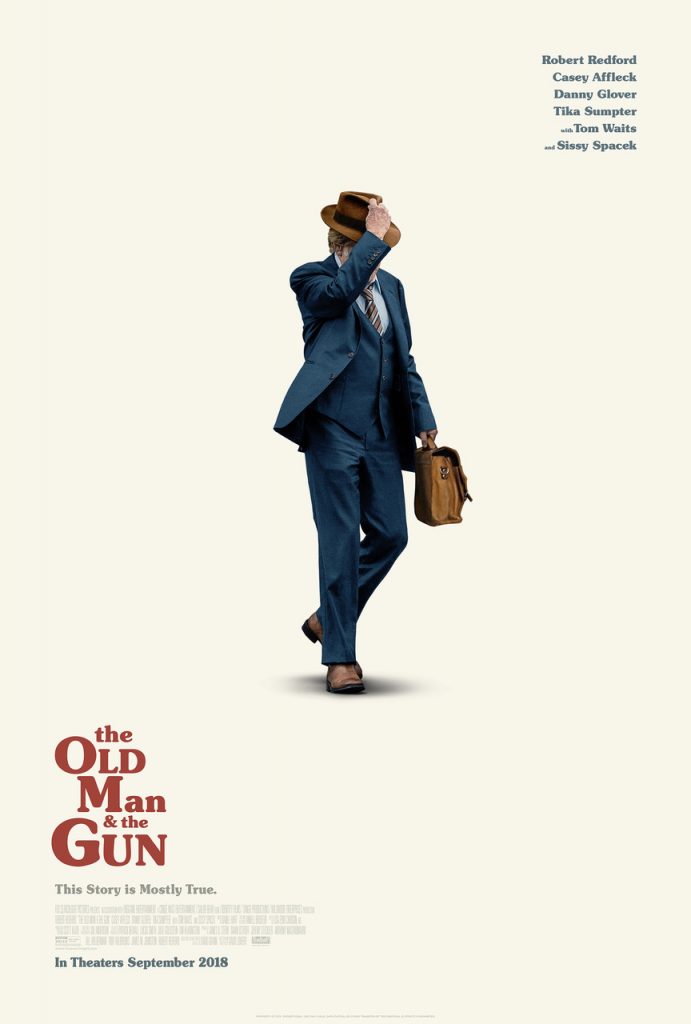 The old man is Forrest Tucker. The gun, well that wasn’t really needed, since he believed that violence was for amateurs and the best stickup men were like actors, able to capture their audience by the sheer force of their personality.

Robert Redford, in what’s said to be his swansong as an actor, plays real-life Tucker in the zenith of his twilight years. It’s bespoke for Redford because Tucker – who died in prison in 2004 – was known as strikingly handsome and extraordinarily charismatic. Redford plays him effortlessly and it’s a must-see end to his legendary career.

At 82, Redford may be as wrinkly as a pet show pug dog, but he’s still spry with one hell of a mop.

Dressed in chalk-striped suits and speaking with a soft lilt, recidivist Tucker loved doing over banks and stole millions over his career that started around puberty. Those quick enough to catch him often remarked that he was smiling as if enjoying the showdown. I guess he wasn’t scared of shackle poisoning because he backed himself to escape. Eighteen times he eluded and contorted out of custody with the most famous being a sail away from San Quentin with two other inmates in a boat they built. The film features a fantastic black and white montage of his escapes, which cleverly uses footage from some Redford movies like The Chase.

In the first heist, Redford somehow gets his head under Sissy Spacek’s bonnet to aid his escape. Spacek plays ranch widow Jewel and a relationship of trust forms between them. There’s no shortage of acting chemistry here.

Casey Affleck – brother of Ben – stars as sergeant John Hunt who relentlessly pursued Tucker and his sidekicks known as the ‘Over-the-Hill Gang’. Hunt and Tucker throughout the cat and mouse chase develop a mutual respect and, in the end, you can tell that Tucker teaches Hunt a life lesson. Moustachioed Hunt with his wavy hair and loosened tie has the archetypal detective look of the time and he’s pitch perfect for the part.

The rest of Tucker’s quirky gang is comprised of Teddy (Danny Glover) and Waller (Tom Waits). As the story goes, the gang had more experience in robbery than the police had in catching them.

Writer and director David Lowery (Pete’s Dragon, A Ghost Story) gives a fresh spin on heist movies, which are typically a maelstrom of panic and tension.

The film is shot with a slightly grainy optical texture which deepens the 70s vibe.

The Old Man is an introduction to a lovable villain and a farewell to an actor Time magazine hailed as one of the top 100 ‘Most Influential People in the World’.

Eddie Allnutt has left the theatre to go home to find his copy of The Last Outlaws.