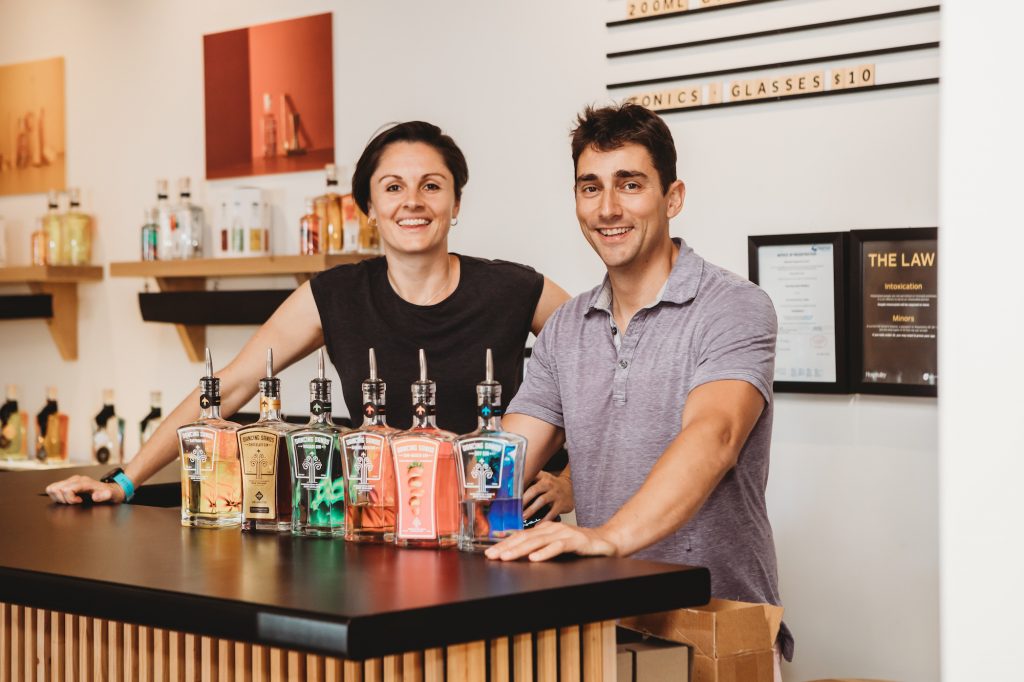 The Dancing Sands are the most remarkable fresh-water vents of the famous Waikoropupū Springs, just outside of Takaka in Golden Bay. Sediment sparkles in the sunlight as the emergence of some of the clearest water in the world causes it to swirl and billow.

They lend both name and inspiration to the town’s Dancing Sands Distillery in Commercial St, and co-owner and master distiller Ben Bonoma feels a strong obligation to deliver a product as pure and beautiful as this natural wonder.

“My wife Sarah (managing director/CEO) and I fell in love with Golden Bay and were eager to work for ourselves,” recalls Ben. “So when we came across a still for sale, we jumped at it.”

The enterprising couple established Dancing Sands Distillery in 2016. But surprisingly, their highly renowned gin was not the original intention.

“We started without having a beverage background,” he continues, “and we actually thought we were going to be focused on rum.” Ben and Sarah decided to diversify, reasoning that they could probably find success with one of three options, so they released a rum, a vodka and a gin.

“And it was apparent from almost day one that the gin was incredibly popular.
This actually suited us just fine, because Sarah and I are passionate gin fans. So it really allowed us to explore, have a bit of fun and produce variations like our wasabi gin, for example.”

Dancing Sands Distillery offers other expressions including saffron and chocolate.

“From a distiller’s perspective, one of the reasons for gin’s popularity is that you have a blank canvas. There are very few rules that make a gin a gin.”

Ben believes gin is enjoying its ‘time in the sun’.

“About 10 years ago the craft gin scene exploded in the UK, migrated across Europe, and eventually found its way to New Zealand. It’s certainly the exciting beverage at the moment.”

Like many other businesses, the Covid-19 lockdown earlier in the year forced Dancing Sands Distillery to reconsider its approach.

“We lost retailers for those six weeks and had put all of our effort into supporting our local bars, restaurants and liquor stores, so it was pretty scary.”

Ben and Sarah’s solution to connect with their customers online was soon justified, as they effectively doubled their social media following, and online sales grew almost four-fold.

“The increased online revenue is great, but the real benefit has been getting to know our customers much better. Instead of selling through intermediaries we can now have a direct interaction.”

Having emerged from that challenge in a strong position, Dancing Sands Distillery has just released its latest variation: sauvignon blanc gin.

“We realised that sauvignon blanc is effectively a New Zealand cultural icon, so combining that with the popularity of gin felt adventurous, but also obvious.”

Using a method called vacuum distillation, Ben is enthusiastic about how well the distinctive passionfruit and green apple flavours have been preserved. “So we’ve been able to really capture that sauvignon essence while creating a great gin at the same time.”

And next year, he is looking forward to seeing the fruition of a long-term plan to tap the American market. But wherever Ben’s gin is found, his message remains the same: “As always, Dancing Sands represents a quality product, which strives to match the surrounding beauty of Golden Bay.”

Dancing Sands Distillery has a cellar door where its products can be sampled and purchased, and visitors can see the distillery in action. It is open from 10am to 4pm Monday to Saturday.