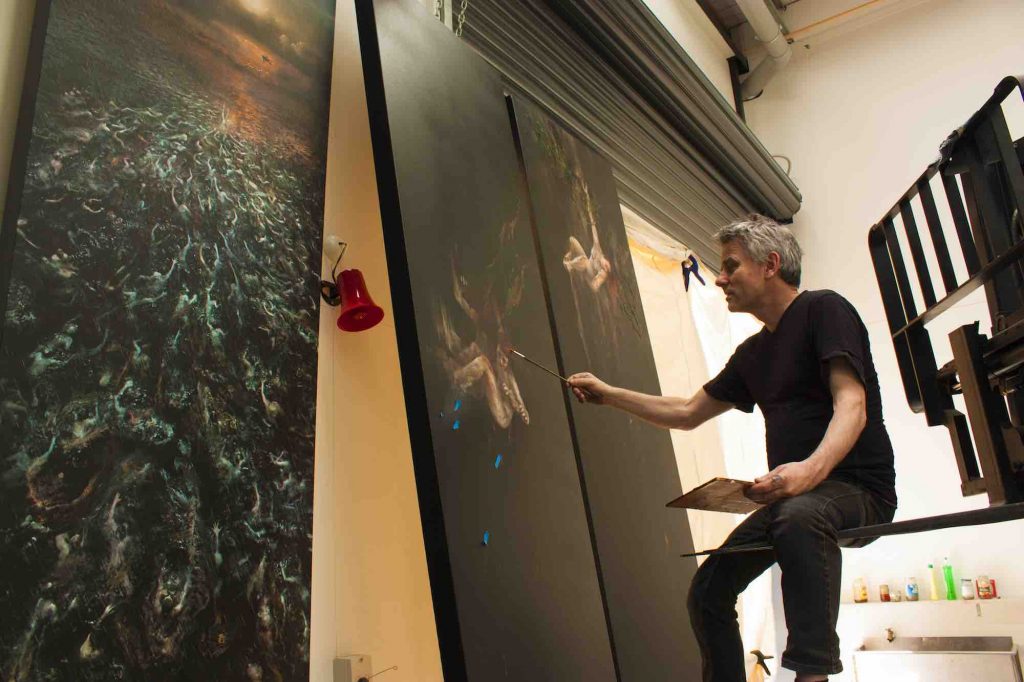 Light Nelson and the Suter Art Gallery play host in June and July to the latest artistic output from one of this country’s most unique cinematic voices.

Vincent Ward is open-hearted, intelligent and reflective when discussing with WildTomato the artistic forces at work deep within himself. And he is refreshingly down to earth, given the director’s string of national and international successes with films such as Vigil (1984), The Navigator (1988), Map of the Human Heart (1993), What Dreams May Come (1998) and Rain of the Children (2008).

“I just have my particular experiences as I’ve lived them, and I try to find expressions for them,” he says. “And that set of experiences has to do with, initially, growing up on an isolated Wairarapa farm, then living and working in many different countries for a long period of time, and having a German Jewish mother and a Catholic father. One of the things that interests me is how cultures collide. I’ve lived among many different cultures and tried to capture those different interactions.”

Vincent is bringing to the Suter’s Memorial Gallery, from June 3–July 29, his show Palimpsest/Landscapes, derived from his exhibition of the same name staged in Auckland in 2016. It will feature three wall-covering video projections, plus two other projected videos.

At the same time he has devised for Light Nelson, from July 6–10, three projections onto the Suter building’s exterior, one seen from Bridge St and the others glimpsed from within Queens Gardens.

With the gallery experience, “Viewers walk into the dark space – a bit like a cavern – and windows of light emerge out of the darkness, a bit like vast stained-glass landscapes,” says Vincent. “At first they might think they are looking at real landscapes; they might see earthquakes, landslides, deserts, caverns or coral reefs. Or perhaps it’s even an inter-planetary landscape, with dust-storms. But then there is the realisation that these landscapes are breathing.

“The term ‘palimpsest’ basically means when something is reused, altered or transformed but still bears visible traces of its earlier form,” he says. “I’m reworking human bodies, turning them into landscapes – painted human landscapes. It’s not a new idea, but I’ve made it my own by offering a fresh take on it.”

Ward has often described himself as an embattled painter who accidentally ended up making films. “I’ve always had this sense of being a frustrated painter, and my films have always been painterly. One of my first, A State of Siege, was actually about a failed painter. And my 1998 film What Dreams May Come won an academy award for the new technology we devised – which I called ‘motion painting’ – that allowed us to create onscreen a vivid sense of moving, visceral paint. Before then there hadn’t been many films that successfully bridged the gap between film and painting techniques.

“Over the past decade I’ve been moved to re-purpose bits of footage from material I created originally as a film maker. I scavenge, if you like, looking to capture moments of essence. These fragments, this debris, I expand to create new works—videos, photographic stills, paintings. They’re what I call ‘artefacts’. I hope that doesn’t sound too pretentious, but it’s from these new, different manifestations that I decide what will ultimately form a show. I’m very open to how it will be.”

The Suter building itself becomes the external canvas for Vincent’s work during Light Nelson. Event project manager Sophie Kelly says the festival is always on the lookout to use New Zealand’s leading artists. “Ann Rush, who’s on our selection committee, happened to be in Auckland talking with Trish Clark

when Trish suggested works from Palimpsest/Landscapes might present possibilities. Vincent liked the concept and the vision grew from there. We discussed the idea with the Suter and everyone realised it was an exciting opportunity for the festival and art gallery to collaborate to bring something very special to the city.”

One of Vincent’s Light Nelson projections is designed to fill the Suter’s glass cube facing onto Bridge Street. “I call it ‘Kaitiaki’ or Kin,” he says. “It’s of an animal – a horse – and a man on a small-town street at night. I shot it originally for my 2008 film Rain of the Children. It’s based on a real event from that area where a naked man, horribly injured in a fight, was found lying in a street, and a horse came up to him. I grew up on a farm, surrounded by animals, so I’m always fascinated by our connection with them.

“The thing is when we staged the shot we actually ended up using a wild stallion. I thought I was getting a tame one but when the guy turned up with it he just said, ‘Sorry, bro’. These are animals capable of incredible violence, yet this horse met with the actor on the street and somehow comforted him. The scene creates a beautiful sense of a kaitiaki, or spiritual guardian – a belief still found in the Ureweras, where the film was made.”

Vincent explains his other Light Nelson work:  “It’s a dual projection onto two Suter wings that face the Queens Gardens pond and bushwalk. It really suits the setting: a mysterious bird that looks like it’s trapped – you get glimpses of this white creature flying up and spiralling around out of the darkness and trees, reflected across the water, with the sound of its wings fluttering frantically. It should be quite striking.”

Sound is critical to these works, says Suter curator Sarah McClintock. “Being the film-maker he is, Vincent deeply understands the power and dimension sound brings to the visual. With both the gallery exhibition and the outside projections his carefully-crafted soundscapes add immeasurably to the immersive nature of the experience.”

In a long and celebrated career, Vincent is quick to single out two highlights he considers major turning points in his life’s work. The first was being a participant in the 2012 Shanghai Biennale.

“I was given an entire consecrated cathedral to myself to exhibit in, right on the Bund in the city’s main tourism area. It was a big thing in my relationship to China,” he says. “Now, I find I keep going back to China because I love the experience that comes from the fusion of traditions I find there.

“I was recently a judge at the Shanghai International Film Festival’s Asian New Talent Award, so I go back for that. I held a guest professorship at the China Academy of Art in Hangzhou, and residencies at Shanghai University, so I return for that too, running new media workshops at Shanghai University. I love these interfaces with different countries; the way people try to express themselves. It shakes up how you see the world.”

As for Vincent’s other pivotal experience, “It is, without a doubt, Puhi Tatu, the 82-year-old woman I spent so much time with for the making of two of my films. She was the central figure in my 1981 short film In Spring One Plants Alone, and then again, 27 years later, when I shot my feature film Rain of the Children. These interactions, my love for that old lady, the world she took me into, almost an ancient world – I would never otherwise have had the chance for such a deep experience.

“She was someone who walked with the dead,” says Vincent. “It was an ancient way of seeing things. People like these have extraordinary lives that go unseen, beneath the radar, yet they have incredible voices that are never given voice.”

Vincent has two abiding memories of times spent in Nelson. One is from his youth when he remembers holidaying in Golden Bay. “My father was a World War  2 veteran who suffered terrible burns to his body when the truck he was driving in Syria exploded. After the war he bought a piece of land, and he struggled to tame and farm it. His body mapped all these incredible hardships. I have this picture from my youth of us holidaying in Golden Bay, seeing him just lying there relaxed, all burnt and flabby.”

The other memory is of himself dangling within the enormous expanse of Harwoods Hole on Takaka Hill. “I was location-hunting for my film The Navigator and just hanging there awestruck on a rope in that huge cavern. Then suddenly I realised I’d have to somehow get back up. I’ve got really, really bad knees – it just hadn’t dawned on me, the predicament I was in, until that exact moment.”

He laughs and adds quickly, “But hey, I love Nelson. I’m really looking forward to bringing my work there. I’ve never participated in a light festival before. It’s a first; an adventure.”